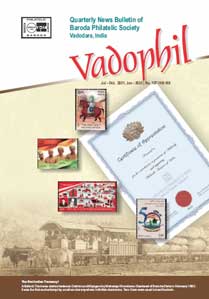 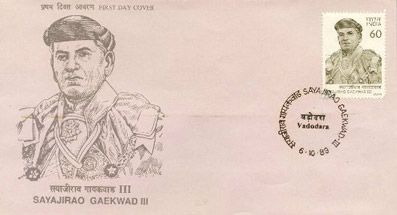 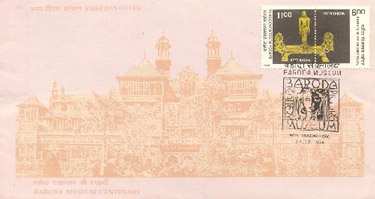 Two Permanent Pictorial Cancellations are being provided in Baroda at Philatelic Bureau, Vadodara and Fateganj H.O. 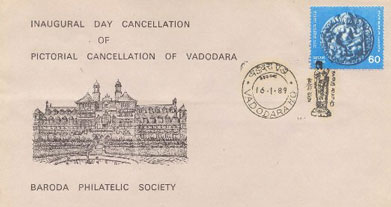 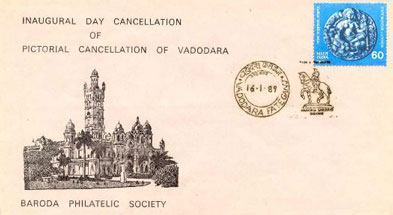 Special cancellations on various occasions were also provided by Department of Post at different post offices of Baroda.

10th Foundation day of the Society

10th Foundation day of the Society was celebratied on 27th April, 1984, A Special Cover with on World Cup 1983 was released on the occasion.

A Philatelic Exhibition was organised on the theme of Cricket on 19th November, 1984. A special cover showing Golden Jubilee Ranji Trophy was released.

To celebrate 10th Anniversary of the Society a thematic philatelic exhibition was organised and
a special cover was released on 2 November, 1985.

Another philatelic exhibition on Cricket was organised on 15th January, 1987. The cover design depicts Logo of Reliance Cup 1987 and special cancellation depicts map of India and Sri Lanka.

ODI between New Zealand and India

To celebrate Nehru Centenary, a philatelic exhibition on the theme of Nehru Family was held from 14 November, 1989 to 16 November, 1989 at Municipal Art Gallery, Badamdi Baug, Dandia Bazar, Baroda.

“VADOPEX-2005”, a district level philatelic exhibition was organised from 4th and 5th February 2005 at Vadodara.

A Special Cover and a Stamp Booklet issued on 15th August 2009 to celebrate 63rd Independence Day of India.

A set of 9 different flags used during freedom movement of India in sticker form was also issued on 15th August 2009.

A set of 9 Self Adhesive labels illustrates 9 different quotes on Non violence by Mahatma Gandhi with portrait of Mahatma Gandhi.

A To mark 135th Birth Day of Sardar Patel, a Special Printed Postcard released on 31.10.2009. Postcards were mailed from Nadiad (Birth Place of Sardar Vallabhbhai Patel) on 31.10.2009 and delivered at Karamsad (Home Town of Sardar Patel). Self adhesive labels on Sardar Patel & Mahatma Gandhi with motif of Swarnim Gujarat (Glorious 50 Years of Gujarat) were also released.

First National One Frame Philatelic Exhibition was organised by Baroda Philatelic Society from 17th - 20th December 2009 at Vadodara. It was first of it's kind in India. A Heritage walk through stamps and a road show were also organised on 17th December 2009.

Special Cover Commemorating Golden Jubilee of Jasu Patel's 14 Wickets at Kanpur Cricket Test Match against Australia in 1959 was released on 20.12.2009.

Baroda Philatelic Society celebrated 38 years of its establishment and as a part of celebration of 38 years of its existence, a non-competitive one frame philatelic exhibition “STAMPMANIA’S - VADOPHILEX” was organized on 27th and 28th April 2013 at Akruti Art Gallery, Beside Kirti Mandir, Opp. S. S. G. Hospital, Vadodara.

Two Special Covers cancelled with Permanent Pictorial Cancellations of Vadodara and My Stamps on Sir Sayaji Rao Gaekwad and Logo of Baroda Philatelic Society were issued on the occasion.

Special cancellations on different occasions were provided by department of post.